Ingrid Chastain readily agreed to accompany her father to deliver vaccines to a mining town in the Montana Territory. She never could have anticipated a terrible accident would leave her alone and badly injured in the wilderness. When rescue comes in the form of a mysterious mountain man who tends her injuries, she’s hesitant to put her trust in this quiet man who seems to have his own wounds.

Micah Bradley left his work as a doctor after unintentionally bringing home the smallpox disease that killed his wife and daughter. But his self-imposed solitude in the wilds of Montana is broken when he finds Ingrid in desperate need of medical attention, and he’s forced to face his regret and call on his doctoring skills once again.

Micah can’t help but admire Ingrid’s tenacious determination despite the severity of her injuries, until he learns the crate she brought contains smallpox vaccines to help quell a nearby outbreak. With Ingrid dead set on trekking through the mountains to deliver the medicine–with or without his help–he has no choice but to accompany her. As they set off through the treacherous, snow-covered Rocky Mountains against all odds, the journey ahead will change their lives more than they could have known.

Books in the Hearts of Montana series: 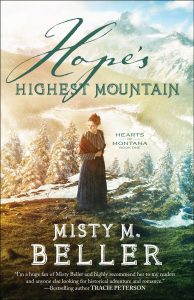 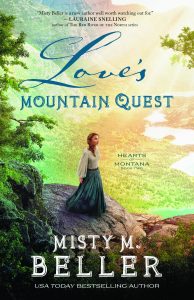 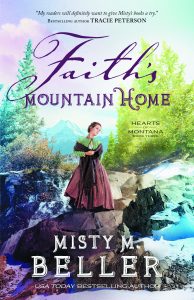 “A gripping tale that made my heart ache for the oh-so-believable characters. Misty Beller is a new author well worth watching out for.”
- Lauraine Snelling
Bestselling Author
“I’ve long been a Misty Beller fan and her book Hope’s Highest Mountain didn’t disappoint. Misty tells a wonderful tale of adventure and romance as her characters face challenges from the past and present that threaten their ability to deal with the future.”
- Tracie Peterson
Bestselling Author
“With a heart-pounding opening, Hope’s Highest Mountain keeps a breathless pace, each broken yet beautiful character overcoming their own mountainous hurdles while navigating the epic yet treacherous Montana Rockies. Misty M. Beller brings the nineteenth-century American frontier to vivid life!”
- Laura Frantz
Christy award-winning author
Close Menu