Get all three books in this compelling Christian historical romance series!

The Rancher Takes a Cook (Book 1)
When their South Carolina home burns to the ground, Anna Stewart’s only choice is to move with her younger brother to the wilds of a Texas ranch. Their prospects are beginning to look better, until the rancher’s son, Jacob O’Brien, shows up with his alarmingly blue eyes to put a kink in Anna’s well-controlled plans.

When danger escalates in the form of a band of cattle thieves with deadly intent, can Anna learn to release control to God’s capable hands…and those of the blue-eyed cowboy who’s stolen her heart?

The Ranger Takes a Bride (Book 2)

After war robbed Alejandra Diaz of her father, her fiancé, and her home—she’s left with a fear of men in any kind of uniform. She escapes across the border with her almost-mother-in-law and finds work on a quiet Texas ranch. The place seems like the safe haven she’d been looking for. Until she meets the rancher’s tall, handsome brother who wears the soldier’s badge of a Texas Ranger…

Edward Stewart has spent years proving his abilities as a man, away from the overbearing protection of his family. As a Texas Ranger, he has the chance to help tame the Wild West and save the innocent. Innocents like the enchanting Mexican woman he rescued, who now lives and works on his sister’s ranch. But the moment she sees his badge, she won’t have anything to do with him.

Can Edward prove to Alejandra that he’s different from the cruel soldiers she’s known before? Will Alejandra hold onto the fear ingrained from her past, or can she open her heart to the kindness of this good lawman? When danger escalates in the form of a band of desperados with deadly intent, Alejandra must fight her hardest battle yet.

The Rancher Takes a Cowgirl (Book 3)

Grace Harper is in hiding. When her father died six months before, she never imagined her unexpected inheritance would threaten her life. What better place to disappear than on a cattle ranch, doing the work she spent the last nine years helping her father with? And surely she’ll be safe hidden in Texas, thousands of miles from her trouble.

Monty Dominguez has spent much of his life working on the Double Rocking B Ranch in Seguin, Texas. He’s worked his way from a 12-year-old orphan stable boy, to ranch foreman and trusted friend of the family. There’s not much he wouldn’t do to protect the people and land he loves, even if it means giving up his own dreams.

When the danger trailing Grace catches up to her, there’s only one way to save the people—especially the man—she’s come to love. Can she find the courage for the ultimate sacrifice to protect those she’s put at risk? Just as Monty’s dreams might finally be within reach, will one misstep cost him everything?

Books in the Texas Rancher Trilogy: 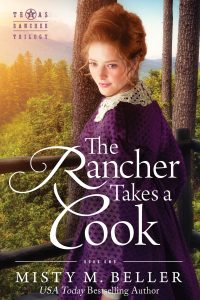 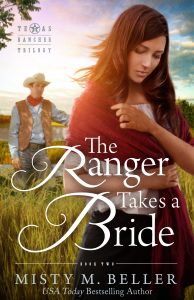 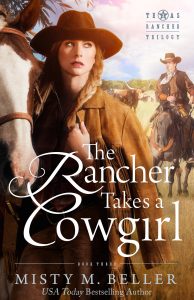 "Read this trilogy in a weekend, the stories were so enjoyable. One of my favorite authors."
- Amazon Reviewer
"Truly a delight to read. From book 1 through book 3 you will not want to put this Texas Rancher Trilogy down as you get to know this unexpectedly strong and devoted family of birth and circumstance."
- Amazon Reviewer
"You just honestly can not put these books down. They are that good."
- Amazon Reviewer
Close Menu