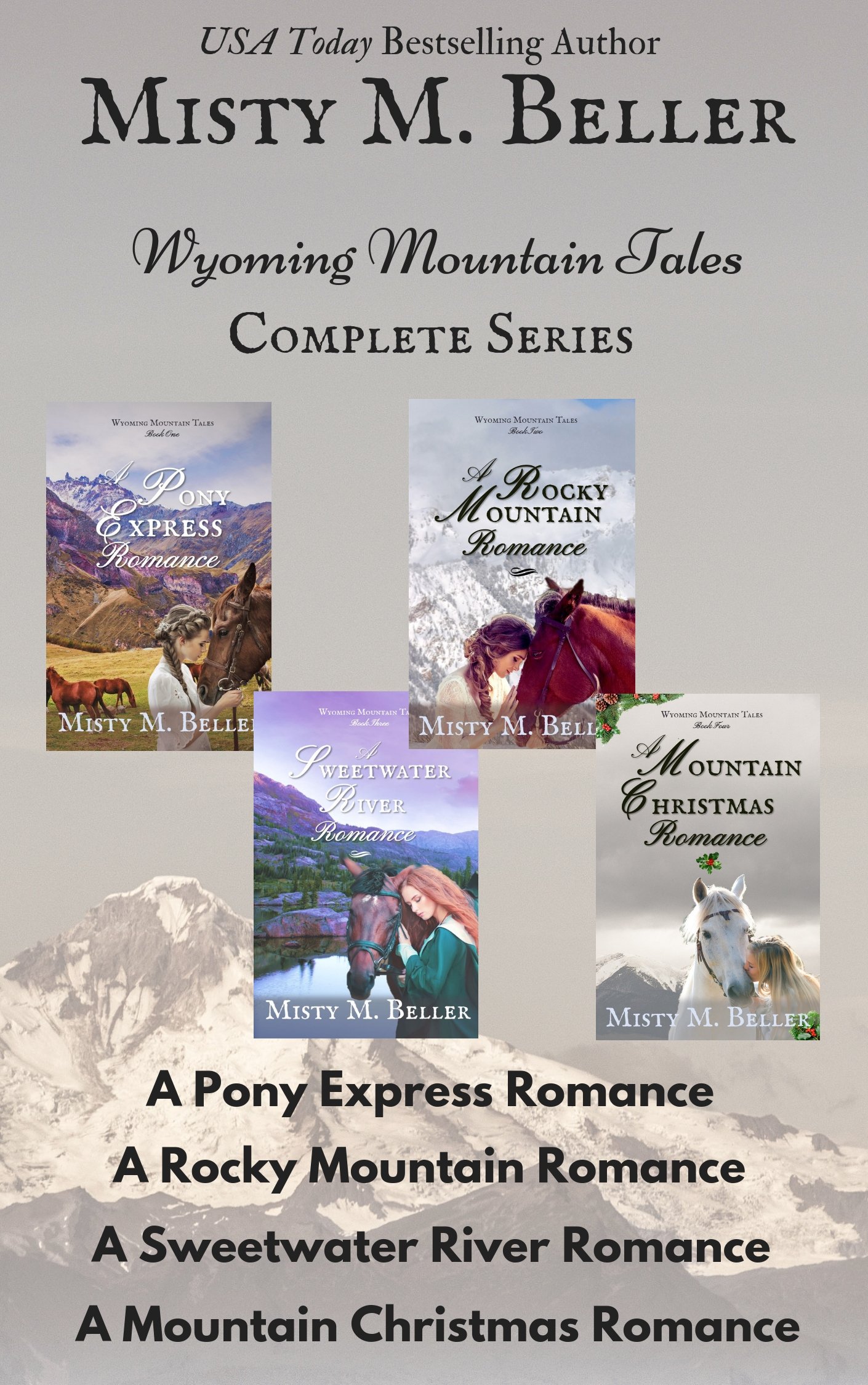 Get all four books in this compelling Christian historical romance series, including a Carol award finalist!

A Pony Express Romance (Book 1)
After growing up as an orphan, Josiah English wants nothing more than to have his own ranch and raise Arabian horses. Riding for the Pony Express seems like the ticket to his dream. And when he meets the stationmaster’s beautiful sister, it seems he may be within reach of the happy life he craves.

Mara Reid is thrilled to finally meet the man of her dreams, and the fact that they both want to raise horses in the Sweetwater River valley seems like confirmation straight from God.

But when the Express shuts down and Mara’s family home is in peril, the danger looming over Mara’s life may not be half as destructive as that threatening her heart.

A Rocky Mountain Romance (Book 2)
The Wyoming mountain country seems like the perfect place for Zeche Reid to find himself. When a blizzard sends him scrambling for cover, he stumbles upon a lady and her professor father holed up in a remote cabin. His protective instincts won’t let him desert them, especially when the father’s haunting memories from the War of Secession put his daughter’s safety at risk.

Fighting her own nightmares after the war, Gretta Michelly is trying to settle into this rugged mountain land, but her bad memories are nothing compared to the demons that haunt her father. The haven they’ve found in these Rocky Mountains seems to be the solace he needs to find peace—until a mysterious sojourner appears on their cabin doorstep.

As Zeche is torn between his craving to protect Gretta and the awful realization that he’s the one putting her in more danger, he’s forced to make a difficult choice. Even at the cost of his heart.

A Sweetwater River Romance (Book 3) A Carol Award Finalist
Taking flight from their quiet Pennsylvania town seems like the only way for Tori Boyd to protect her dearest cousin’s virtue. And the success of their escape may now depend on the man she’s been writing letters to for over a year now in the vast wilds of the Wyoming Territory.

Ezra Reid has finally stepped out from under the shadow of his older brother and sister, as the success or failure of the Rocky Ridge stage and telegraph contracts falls squarely on his shoulders. He’s entirely focused on the work – at least until his mysterious correspondence partner shows up on his doorstep.

As Ezra takes on the search for a proper situation for Tori and her cousin, there seem to be no good options for the ladies. Especially since Tori won’t even discuss the one option that might succeed – marriage. When the danger chasing the women takes on a form none of them anticipated, how far will Ezra have to go to keep the Tori and her cousin safe?

A Mountain Christmas Romance (Book 4)
Stripped of the family so important to his Viking heritage, Matthias Bjork is now on the hunt for his sister. Despite combing the entire Wyoming Territory, he hasn’t found any substantial leads regarding his sister’s whereabouts, but he has discovered a most unusual woman.

Opal Boyd has finally found the haven she’s longed for all her life, in a most unlikely place—working for a German couple in this remote Wyoming mountain town. She learned long ago that most men couldn’t be trusted, but the mountain man boarding with her friends seems to have the respect and affection of the two people she’s learned to trust implicitly.

When he shares the magical experience of his family’s traditional Viking Yule celebration, she can’t help but fall a little more in love with him each one of the twelve days of Christmas. But when Matthias’ search for his sister takes an unexpected twist, Opal is forced to make a choice that will alter the course of her life—no matter which answer she chooses.

Available in ebook and audiobook!

"Beautiful story! Outstanding characters and plot."
- Amazon Reviewer
"When a writer can combine falling in love, great characters, amazing storylines, scripture, and a true devotion to God all in one book, the author is talented; but when they consistently do this in every book they write, it has to be Misty M. Beller."
- Amazon Reviewer
"The author has a special way of making the characters come to life and I can really feel the emotion of their triumphs and struggles. Highly recommend!"
- Amazon Reviewer
Close Menu