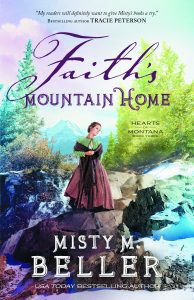 Nate Long has always watched over his identical twin brother, Aaron, even when it put him on the wrong side of the law. When Aaron is wounded in a shootout, the brothers are taken to Settler’s Fort to recover. As Nate works to make reparations for their past, he marvels at the nursing Aaron receives under the care of a woman with all the reason in the world to resent him.

Laura Hannon knows what it is to start over, and she knows Nate’s newfound faith is real. What she can’t look past is how far he allowed himself to be led astray by his brother’s weaknesses.

As a fledgling trust grows between Nate and Laura, they stumble upon a mysterious cave in the mountains that may not be as uninhabited as it seems. As they work together for a common cause, will the new lives they seek for themselves include love, or is there too much that stands between them?

Apple Books
Amazon
Barnes & Noble
Kobo
Google Play
Christian Book
Close Menu
We use cookies to ensure that we give you the best experience on our website. If you continue to use this site we will assume that you are happy with it.Ok